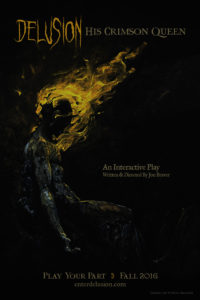 Delusion: His Crimson Queen just may be the hottest ticket to any event this Halloween season here in Southern California. Ironically, Delusion isn’t a haunt – it’s immersive theater set within a spooky environment, dressed up in frightening tales, and performed flawlessly by very talented actors. While Delusion isn’t a haunted attraction, it does run during the fall season, and has become synonymous with Halloween here in Los Angeles, making it a must-see on everyone’s spooky To-Do list.

Finding a ticket for the 2016 season of Delusion: His Crimson Queen is nearly impossible at this point. The production sold out extremely fast as soon as tickets went on sale. This year, the ticket demand is beyond crazy, since Delusion was on hiatus in 2015; fans ravenous for the show’s return snatched up tickets very quickly once they went on sale in August. In fact Delusion: His Crimson Queen was completely sold-out before the show’s cast was even locked.

The story and theme of Delusion changes drastically each seasons. Creator Jon Braver and some of his team unveiled the title of this year’s show – His Crimson Queen – at Midsummer Scream in July, which was met by whistles and thunderous applause from more than 300 fans sitting on the edges of their seats in anticipation of the announcement. Immediately, speculation spread as to the exact theme of Delusion 2016; the popular consensus all along was that Braver was bringing the show back as a vampire tale. That consensus proved to be correct; Delusion has brought bloodthirsty children of the night to Los Angeles!

HERE THERE BE SPOILERS!

Note that I’m not really going to delve into specifics here – that’s not our style. However, I am going to discuss certain aspects of Delusion 2016 that definitely cross into spoiler territory. If you don’t want to know anything at all about the show because you’re attending soon, I suggest you bookmark this page and return after you’ve experienced it on your own. For those who have seen Delusion already this season, or simply don’t mind a little spoiler action, proceed…

So here’s the good news: Delusion’s vampires don’t sparkle. They also begin smoking when exposed to sunlight. It seems that Jon Braver and crew have gotten the whole lore down correctly. In fact, I can’t even recall any of the talent flashing “LOOK AT ME! LOOK AT ME!” fangs at us during the experience, either.

If there is a downside to balance out the “good news” regarding Delusion, I’d have to say that the problem lies with the people you’re grouped with, rather than the production itself. There are several story moments that are pretty pivotal in His Crimson Queen when guests are asked to peer through windows or to watch events as they unfold from very controlled vantage points. Unfortunately, the very nature of people never defaults to “mindful” or “courteous” in situations like these, and the largest guests in the group immediately form a flesh wall, ensuring that those of us who are… vertically-challenged can’t see a damn thing. This happened to me and others in our group several times during our Delusion experience, and it got really old very fast. Rather than say, “MOVE, dude!” or anything else that would disrupt the show, we simply bit our tongues and dealt with it the best we could, moving quickly or maneuvering strategically around the group in anticipation of where the scene would play out next. Operationally, I think it would be a good thing for the Delusion team to simply remind guests to be mindful of the fact that not everyone is tall as they explore the mysteries of the old mansion. Perhaps that kind of social etiquette nudge would help, or maybe it wouldn’t; any attempt would be greatly appreciated by those of us on the shorter end of the stick!

Like any Delusion production, the story unfolds and presents itself to guests as they make their way through the property itself – whether it be an old mansion, church or estate. Braver has a story in mind – and likely most of it written – and then adapts it to the physical surroundings that Delusion lives in each season to take full advantage of its surroundings. His Crimson Queen is masterful in its use of the floor plan of the old home it resides in this year; completely organic to the show beats and pacing of the story. This is especially impressive this year, considering the owner of the property has been slowly renovating the home, and demoed much of the interior in July; what was to be a 5-week build and install schedule for Delusion was disrupted by the construction, leaving the team only 3 weeks to install the entire show. Many all-nighters were pulled so that we could enjoy His Crimson Queen, and our hats are off to the entire Delusion team for coming together and making everything happen so seamlessly. 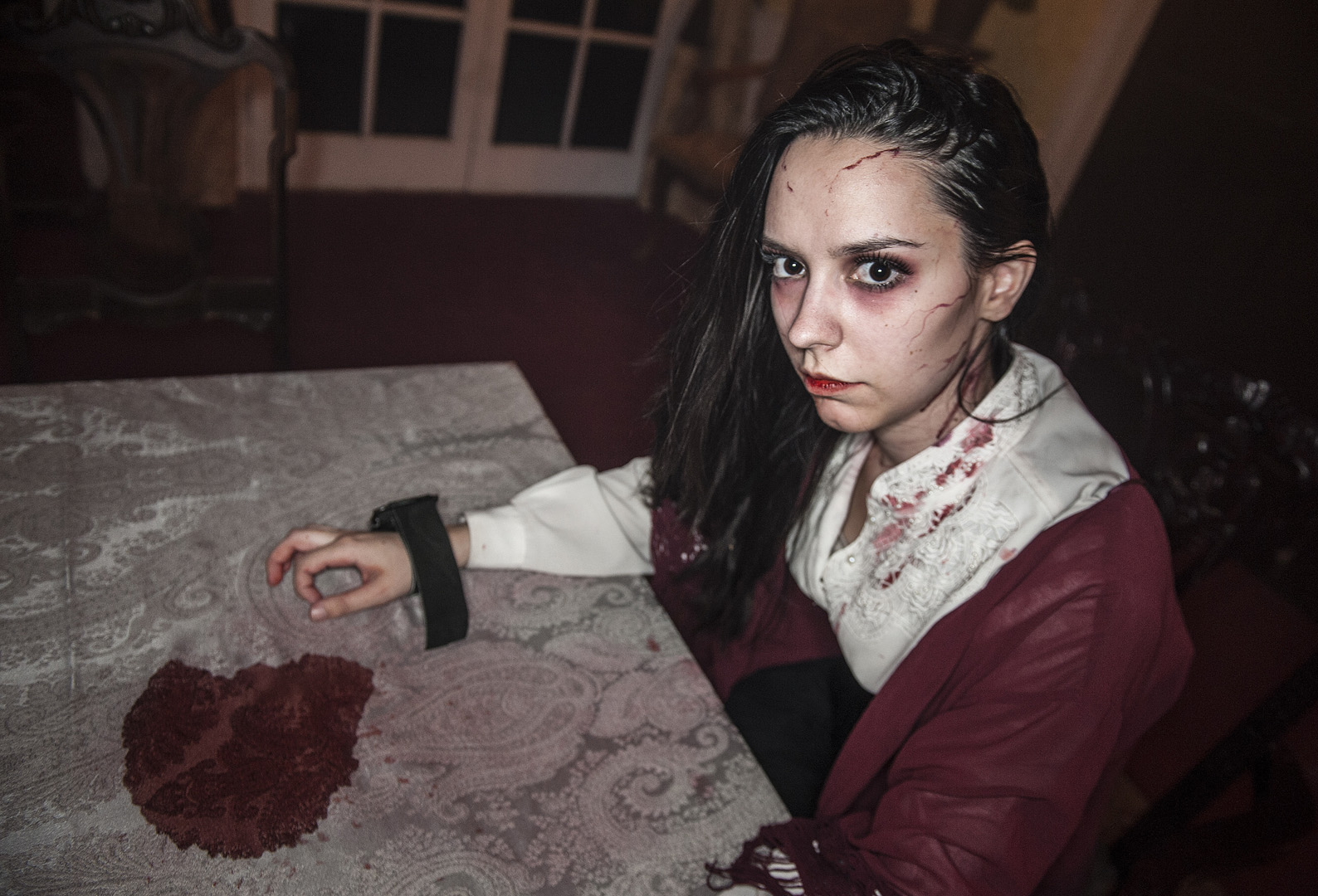 I’m a sucker for visual “Wow!” moments; Delusion never fails to deliver. His Crimson Queen has several truly stunning moments that make you wish your eyes were a camera and you could capture what you’re seeing. Ironically, the biggest visual thrill for me this year doesn’t come from an actor, but rather an animated prop; I’m not going to give it away, but damn – talk about impressive! There is however, a small caveat that I have regarding this very thing that I am so fond of when we experience Delusion. After seeing Delusion for several seasons, it is apparent that Jon has a few big stunt tricks in his bag of tools that he likes to use – and they do elicit gasps and wonder from guests; specifically, those guests who perhaps haven’t seen any of Delusion’s productions before. Those of us who have – may begin to find the same few stunts a bit stale, regardless of how they are executed in the course of the show. This is how I felt during His Crimson Queen. “Oh, this is where they’re going to do Stunt A. And here, here’s a good place for Stunt B…” To avoid the pitfalls of a formulaic rut, it would be my suggestion that Delusion not employ the same stunts each season – if anything, to keep fans guessing and to ensure those big “Wow!” moments are truly fresh and unexpected in the years to come. Again, this is just a small thing – but it definitely came to mind as we lived out the Delusion experience this year. 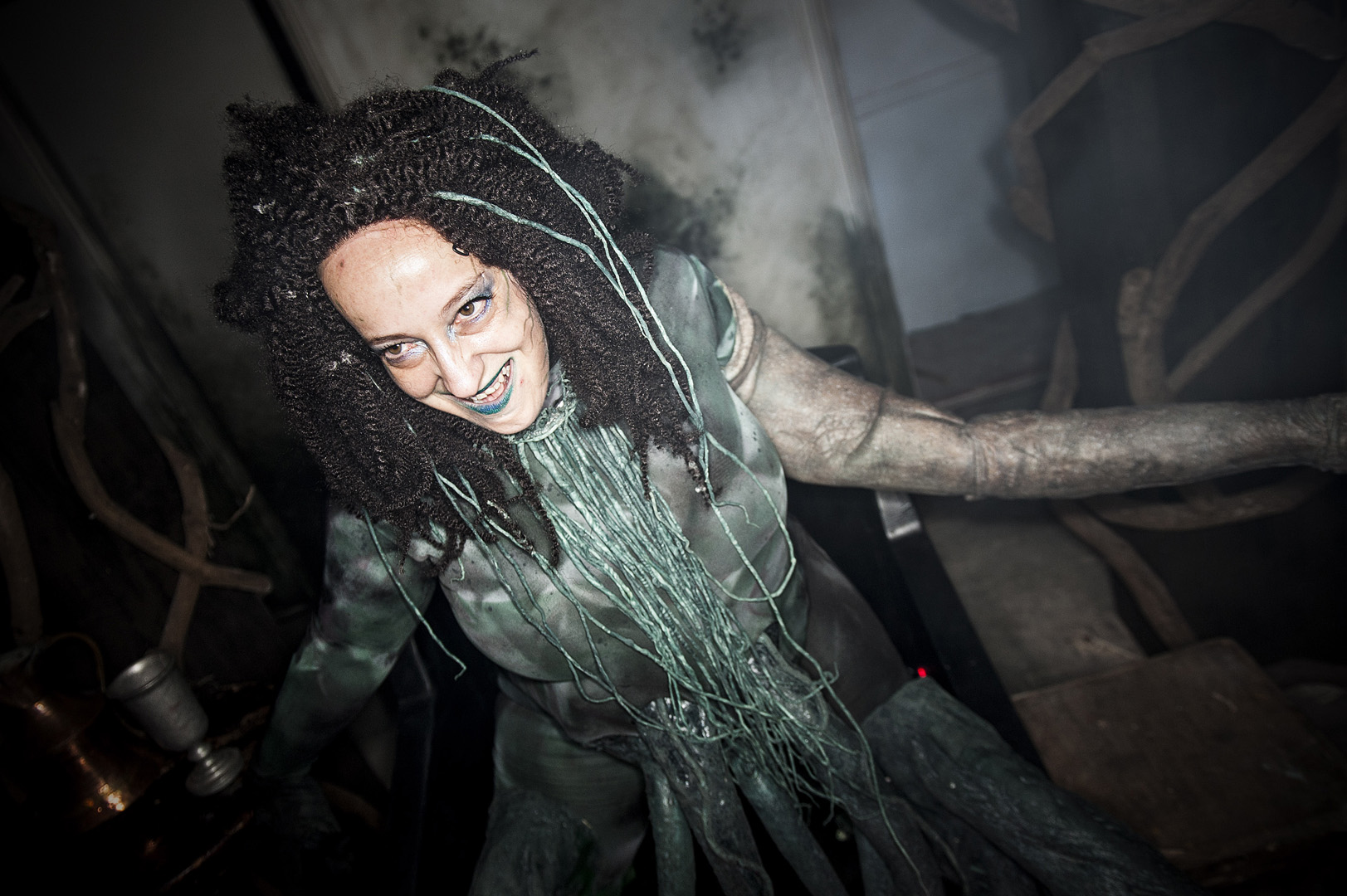 The talent is the backbone of Delusion. As is the case with any theatrical production, you can have the best script and the best sets – but without a fantastic cast and crew, you really end up with a flat show that is less than spectacular. Every performer we encountered this year was terrific; we bought each character completely, allowing for immediate suspension of disbelief, even though we know there are no such things as vampires. Even scenes featuring individuals we personally know played out so smoothly and well that we cast the “real world” aside, and saw them as the characters they were portraying from Jon’s script, and they were awesome.

During the course of His Crimson Queen, individuals do get separated from the group, in some cases more drastically than others. This is not a favorite component of mine in any haunt or theatrical attraction – because when all is said and done, those people miss out on certain elements of the show. The response to that is appropriately that while those individuals do miss out on what everyone else is seeing – they get their own unique experience that no one else does. I get that. Yet, there is still part of me that winces when I see someone locked away in a closet or forced to go to another room to complete a task away from the group. I like my haunt/theatrical experiences to be fairly linear, and as a themed entertainment writer, I suppose it’s simply my default mindset of giving everyone the same show from the best vantage point possible. Even though I know that doesn’t need to apply to haunted attractions or immersive theater productions, it’s just a point that I get stuck on, as do other fans that I talk to from time to time. So be aware – yes, as in years past, you may be separated from the group or your friends for a short amount of time as you experience Delusion 2016. 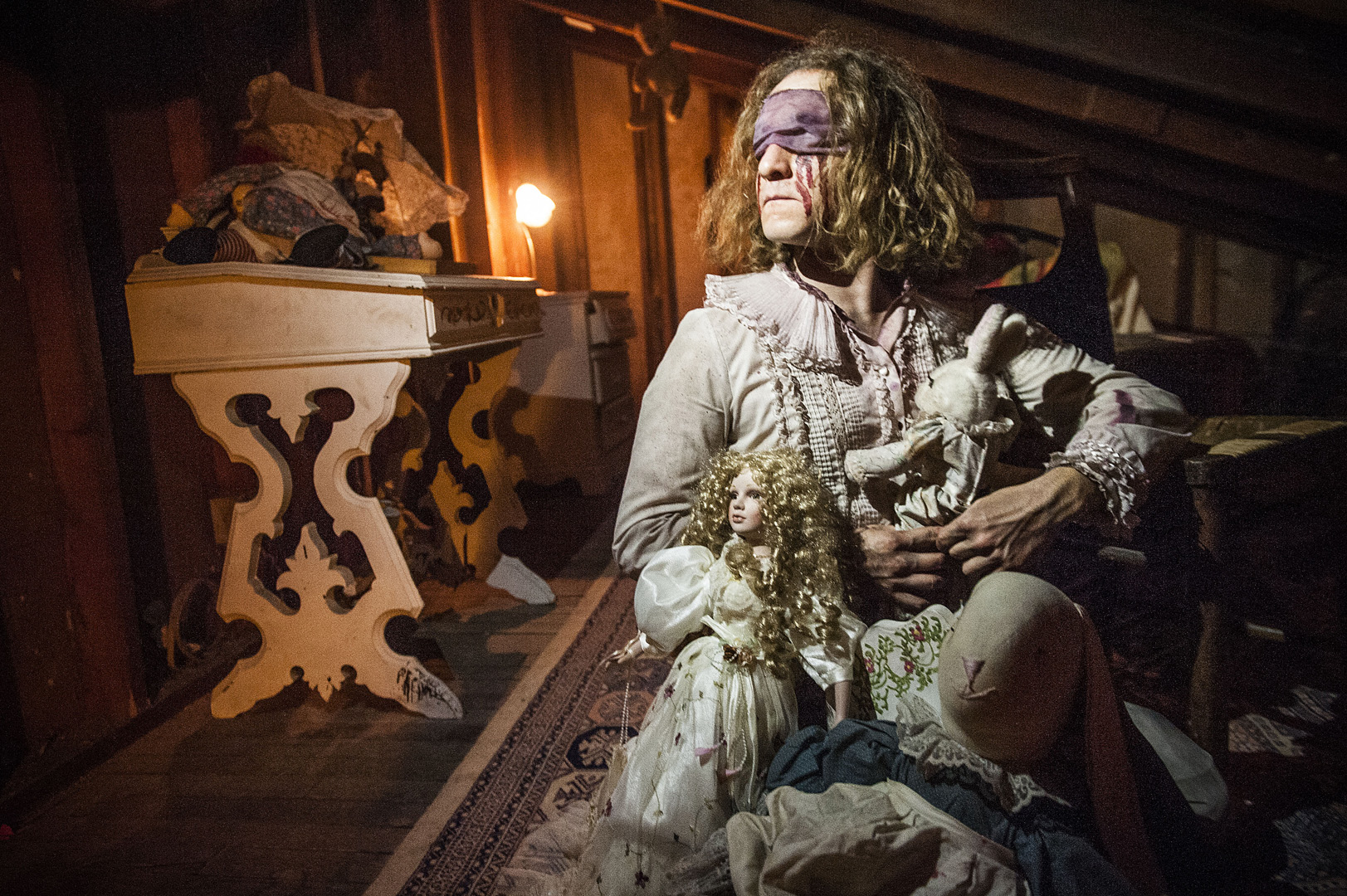 Puzzles have always been an important part of Delusion’s stories (my mind is still blown from the moving wall from Lies Within). Never before has that been so prevalent than in His Crimson Queen. In fact, approximately half-way through the experience, guests find themselves in a straight-up escape room situation of sorts, where they must all split up and search for specific artifacts and then figure out what to do with them to unlock the story so they may proceed. Reflecting back on our experience, it seemed a little out of place, considering how guided the rest of Delusion is and always has been. Further pondering has me feeling that while a bit out of place, the “escape room” portion of His Crimson Queen wasn’t forced or so unnatural that it was jarring, or even just a tad out of sorts. This practically seamless integration of a popular trend into the fabric of a complicated story – is impressive. Again, major props to Jon and his team for pulling this off so nicely.

Delusion: His Crimson Queen lasts just over an hour, which is a really great experience length for something like this. You leave Delusion feeling satisfied, and never once have the urge to glance at your watch out of boredom. In an industry where companies are charging really high prices for their experiences, you can be certain that Delusion delivers what you pay for. Jon Braver and his crew have done this long enough and Delusion has more than proven itself; it’s one of very few seasonal productions here in Southern California that people generally don’t balk at due to its price point. Delusion has earned our respect, the team has earned our money, and judging by the reaction of our peers, friends and others – Delusion has yet again, reaffirmed itself as one of the Southland’s must-see attractions for the fall/Halloween season.

Currently, Delusion is hopeful that it will be extended into November. If that happens, tickets will be released and will definitely sell-out very quickly. To have the best possible chance at getting tickets, we suggest you sign up on the Delusion website for their newsletter. The crew has stated numerous times that is the best way to be kept up-to-date with the latest information regarding the show and its possible extension. 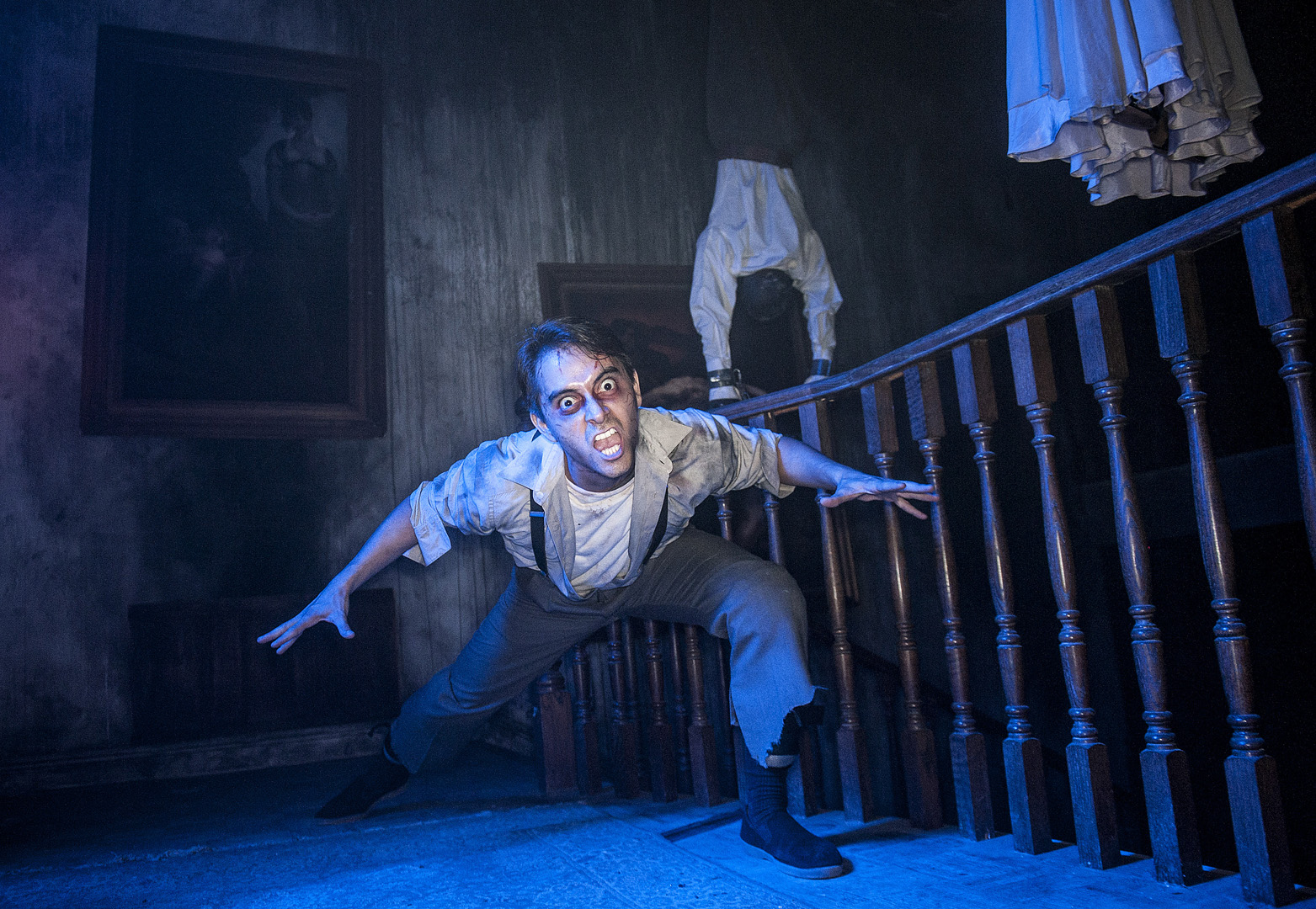 Thank you to the cast and crew of Delusion 2016; you should all be very proud of your work. We are grateful for the opportunity to see what you have been working so exhaustively on these past several months. Your blood, sweat and tears have paid off. Delusion is haunting, beautiful, entertaining, and serves as a not-so-subtle reminder that Southern California truly is the best place in the world for Halloween experiences of all types.

The post Delusion Returns to Los Angeles for 2016… with Teeth! appeared first on Theme Park Adventure.