Arriving at Dark Harbor, the stately ship’s smokestacks rising up along the shoreline provide a stunning backdrop to the freaky festivities. On media night, the landlocked mazes were a bit green around the gills, but the close quarters of the shipboard mazes shivered my timbers.

NEW for 2017
FEAST cooks up gastronomic gore with the maiden voyage of this shipboard fare. Large windows in the maze allow you to peer down into the bowels of the grand old lady. The Queen Mary boasts real haunted spirits aboard, so you might catch a glimpse of something sinister if you linger in the larder.

THE MEAT LOCKER is a vodka ice bar. It’s a great place to chill between mazes with temperatures hovering around 7 degrees. Icy blonde servers suited me up in a parka, so I wouldn’t catch frostbite. Inside, you’ll see the Chef’s victims frozen in huge blocks of ice. Choose from a wall of flavored vodkas to build a personal tasting flight.

RETURNING ATTRACTIONS
INTREPID has been moved from it’s Dome location into the area formerly possessed by THE VILLAGE OF THE DAMNED. There are good and bad elements to this move. I preferred the height in the Dome and the scaffolding that guests previously had to scramble through. In the new location, the maze is longer, but theming is a bit of a problem. The story of the maze involves the Scottish Iron Master who protects the Queen Mary, but as the extended maze continues into the honeycomb of rooms, I found a world of Plague Doctors with their beaked faces lurking in the dark. I was confused about how these healers related to the Iron Master’s story, so it felt like two elements that didn’t quite meld.

CIRCUS felt more like a tattered carnival than the bright and shiny big top. The floors and walls have been so marked up by guests over the years that the funhouse element has lost a little sparkle. Following the scuffed trail of footprints, I could easily tell where the twists and turns have dead ends. The Freak Show performers who were in a private bar last year, have moved into the tent. The actors look incredible and the theming works, but there were few scares as the performers stood still and waved at me as I walked by.

SOULMATE, on the ship, is one of the reasons to visit Dark Harbor. They’ve kept the eerie beauty of the propeller room and added more gory props to the story of Graceful Gale’s ruined romance. I encountered Gale early on in her traveling suit, but I missed her in her dreamy white ballgown. She’s typically found at several points in the maze and I’m not sure if she was taking a break or if she has been removed. I hope she’s still to be found inside because seeing her wistful waltz is a highlight for me.

LULLABY is my favorite maze on the ship, the incredible young women playing the part of Scary Mary are creepy and cute. They manage to hide in places that seem too small for any human and burst out of the shadows threatening to kill like a twisted game of hide-and-seek. I love how they make a real effort to engage guests by asking your name and then answering with a cheeky sing-song, “oh well, that doesn’t matter now because you’re going to die.”

B340 is a journey through the mind of a serial killer on the ship, so maybe it makes sense that I tend to suffer from carnage fatigue in this frenetic maze.

DEADRISE is an exciting open-air maze with fire and water elements. Maybe this was bad timing, but I found hardly any monsters inside. Were they all chopped up by the Chef in Feast? I’m not sure what happened, but I have enjoyed this one in the past and I have to hope that Half Hatch Henry and his crew of scabby sailors will be back soon. Put your phones away in this one. You may get wet!

ENTERTAINMENT
Dark Harbor has the most extensive and exciting entertainment schedule of any Halloween event. This year the layout has been changed to make room for three performance stages. MAIN STAGE offerings include Hula Hoops and Magicians. The AERIAL STAGE has soaring acrobats and the BIG TOP STAGE showcases Traveling Tricks, Marionettes, and more. There is also a CLOSE-UP TENT with magicians, and SLIDER ALLEY featuring four nightly shows.

PARKING
When I visited on opening night parking was listed at $40 per car. With ticket prices starting around $20, I have to say it was my first fright of the night. (Notice how I refrained from saying it cost an arm and a leg). Please know that this has changed. Parking onsite is now less expensive, but your best choice is parking at the Aquarium of the Pacific Parking Structure for $16 per vehicle and taking the free Dark Harbor Express boat ride to the event. This is a great way to start off the night. Details online.

Dark Harbor 2017 has a variety of ticketing upgrades available from Fast Fright wristbands to the Ultimate Scream Experience ticket which includes Expedited VIP entry, Fast Fright Access, RIP lounge access, a Guided tour of each maze, and Access to 1 Secret Bar. Only ten of these exclusive tickets are sold per night. Check out all options for your visit on the Dark Harbor site.

Spectres in the fog 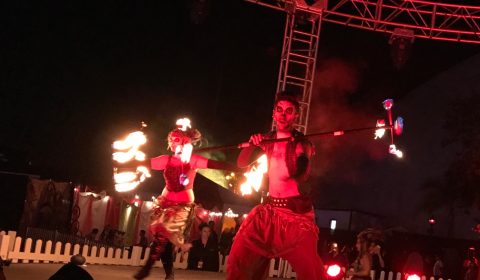 Evil Eden was traumatized at an early age by Stephen King. Reading his short stories under her bed at night, she soon realized that the best way to defeat the monsters under the bed was to snuggle up and make friends with them. Like-minded creepy souls can find her on Instagram and Twitter where she shares Angeleno haunt reviews and her original art.